Clouds, Contrails, and Chemtrails in Our Sky 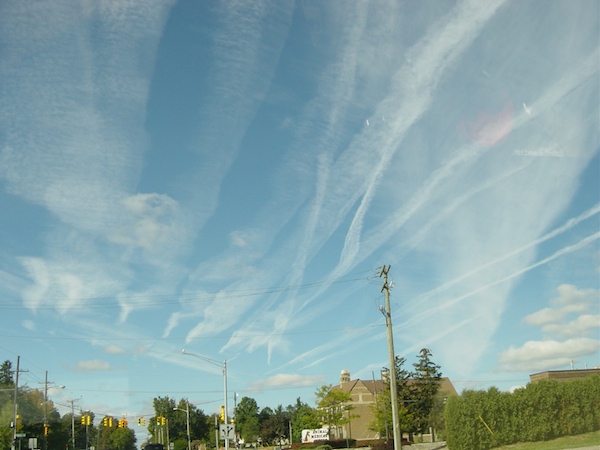 Is it a cloud?  Is it a contrail from a jet airliner?  Is it a chemtrail? Or perhaps you didn't even notice.  It's a known fact that the vast majority of people generally don't look up unless there's a reason to do so. The average person pays no attention to the sky unless they're going on an outdoor excursion and the sky grows dark.  And it's no wonder.  In today's busy world of multi-tasking we never seem to run out of eye level tasks whether it be the computer, the children or preparing meals.  So the next time you're outside take a quick look at the sky.  You might just catch a glimpse of those 'clouds' streaking or crisscrossing the sky like a tic-tac-toe board.   They've been seen all over the world since the early 1990's.  Cloud, contrail, chemtrail.  Contrails aren't something that can be turned on and off as shown in this video.  Read on and decide for yourself if you really want to be outside when this is occurring. 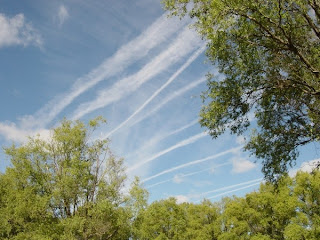 Those in authority would have us believe these streaks in the sky are nothing more than normal contrails from airplane engine exhaust.  Unless there's a scheduled air show in your area, it's not likely.  If it were an air show you would see their trails dissipate rapidly, not hang in the air and spread over the course of several hours turning the sky into a murky haze.  Pilots in air shows normally fly straight in unison to avoid crashing.  Seems logical to me.  So why are these streaks all over the place going in every direction?  Well anyways, that's their side of the story.  Next theory please.

Now on the chemtrail side we have many suggestions.  We'll start with weather modification.  Nowadays they like to call it 'Stratospheric Aerosol Geoengineering' or 'persistent contrails'.  Many countries are now admittedly involved in weather modification.  Unfortunately, it's mostly used for their own dire purposes rather than the benefit of mankind as indicated by the chemicals dispersed.  Metals such as silver and aluminum oxide, chemicals such as barium, sulfur dioxide, and calcium chloride, as well as polymers, fungi and bacteria are found in these dispersals.  Chemtrails are identified by their high degree of persistence and slow spreading.  Some people have even witnessed them containing a rainbow when sunlit.  Perhaps the most well known incidence of weather modification through seed clouding is the 2008 Summer Olympics in Beijing, China. Seed clouding was accomplished from the ground by the firing of rockets packed with silver iodide crystals into rain clouds which created downpours in the surrounding suburbs.

As you can imagine this type of weather modification can have detrimental effects on one's health.  For those already afflicted with asthma, outdoor activities during heavy spraying can further aggravate their condition.  Furthermore, some medical professionals have drawn the conclusion that inhaling these varying particles may be contributing to the upsurge in the number of asthmatics by those who never previously experienced symptoms of respiratory distress.

Lawsuits are popping up everywhere by those who believe their rain is being 'stolen' by weather modification and seed clouding especially by those in the farming industry.  After all, there is only so much precipitation available.  If you make it rain heavily in one area it is bound to be dry in the surrounding areas. There is even much speculation that those in charge of modifying weather patterns are either purposely or inadvertently causing the extreme weather conditions around the world.  This would include everything from droughts and flooding to tornadoes, hurricanes and hailstorms.  Perhaps even the record snowfalls being recorded as well as earthquakes.

Another theory is the need to slow down or halt the escalating temperature of our planet known as global warming.  Studies are currently underway, termed 'solar radiation management' (SRM), where particles of sulphate are pumped into the stratosphere in an effort to reflect incoming sunlight away from our planet.  Ongoing studies are also investigating ways of carbon dioxide removal (CDR) from the atmosphere. Sulfate aerosol spraying could have negative effects on all living organisms as it is a known environmental hazard. Those with sulfur allergies are especially at risk and it can be an eye and skin irritant to anyone. Although it has been in use for decades, further studies are needed to investigate the global impact as well as the actual influence on the temperature of our planet overall.  Other particulates being used to reflect sunlight include aluminum oxide, barium and strontium.  Aluminum toxicity is being investigated as a possible cause of autism, ADHD, and Alzheimer's.  Barium and strontium are toxic to life as well. 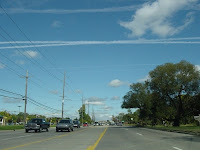 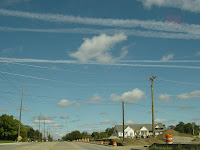 Just changing our beautiful blue sky into an overcast murky gray can have serious consequences. Depending upon the quantity dispersed, filtering sunlight can also effect plant growth negatively. Plant life depends on photosynthesis.  Soil composition is being radically modified.  Water is being poisoned.  People who suffer with Seasonal Affective Disorder (SAD), will experience further depression.  What can we do about it?