Drugs in Our Tap Water

Drugs have become a major source of toxic pollution to our drinking water resources. It's no wonder as we've become a pill-popping society.  It seems there's a pill or drug available for every ailment out there.  New and debatable drugs come to market every day. Whether or not they assist in treating the majority of our maladies is questionable. Nonetheless, we continuously seek new pharmaceuticals in the hope of being miraculously cured.  If there was a drug to prevent a hangnail, you can be sure someone out there would take it. 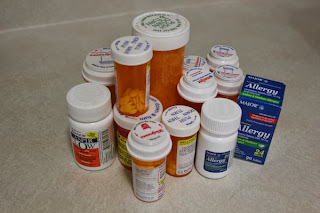 We all make choices.  People are free to ingest whatever their physician might prescribe or even more freely to take over-the-counter drugs at will.  Pharmaceutical companies are making sure we have plenty of choices to make.  Analgesics, antibiotics, statins, steroids, antidepressants, anticoagulants, contraceptive pills and the list goes on.  The problem is that maybe the guy down the street isn't worried about hangnails and you aren't seeking antibiotics to fight infections you don't have or antidepressants for depression you're not suffering from. Worried about your cholesterol levels?  Maybe you should drink more tap water.

The problem is that more and more drugs are turning up in our drinking water because most water municipalities don't have the capabilities of filtering them out of our water.  Could they be filtered out?  Most certainly.  But being cost prohibitive, it isn't likely to happen anytime soon.  Once again, we're forced to take matters into our own hands.  Residential water filtration for pharmaceutical drugs comes at a high cost. Bottled water is an option, but only if you can be certain of the safety of the source.

The most highly recommended method of filtering tap water is reverse osmosis in combination with activated charcoal.  This will filter out just about anything that might be lurking in your water.  The problem lies in the expense. The initial installation of a reverse osmosis filteration system is simply not affordable for everyone, and the need to replace charcoal filters fairly frequently further adds to the cost. However, those purchasing bottled water by the case every week would quickly recoup their cost.  This would also prevent a lot of empty water bottles landing in our lakes and landfills creating their own set of problems and pollution. There is one other major drawback to some reverse osmosis water filteration systems.  Many older and less expensive RO systems waste incredible amounts of water to attain adequate purity levels.  As much as three gallons of water are wasted to achieve one purified gallon of water.  Newer RO systems have recently come to the market that promise zero waste. Something to look into if you are paying a water bill, not to mention the fact that potable water is swiftly becoming a precious commodity.  We don't need to be unnecessarily wasting it.  There are a couple examples of zero waste RO systems shown at the bottom of the page as well as one that can be retrofitted to older systems to conserve water.


Unused drugs should never be flushed down the toilet.  Proper disposal of unused drugs would go a long way to prevent some of the contamination of our water supply.  Simply return any unused over-the-counter or prescription medications to a participating collection pharmacy.  They are then sorted for proper disposal or redistribution to third world countries in need of them.

Drugs for pain, infections, high cholesterol, seizures, allergies, asthma, heart ailments, birth control are all showing up in our lakes, rivers and streams and finding their way into our drinking water supply.  More and more drugs are being prescribed not only for humans, but for farm animals and pets as well.  From snails to whales, hormonal drugs and other chemicals that mimic estrogen are affecting egg and sperm production in fish and other aquatic life.  In many areas around the world male fish are becoming feminized and producing eggs instead of sperm.  These gender-bender hormonal drugs and chemicals are affecting other wildlife as well.  Increasingly, many species of mammals are being found with both male and female sex organs or hermaphroditic traits.

A wide variety of pharmaceuticals are being discovered in the drinking water supplies of major metropolitan areas.  The Safe Drinking Water Act was passed in 1974, requiring cities  to report contaminants in drinking water to their citizens.  Pharmaceutical drugs are not covered by this act as they are not yet on the EPA's list of hazards.  Private wells serving 25 or fewer individuals are not regulated.  It is up to the individuals to have them tested.  Some of the larger cities tests results can be researched online. Many cities don't test for pharmaceutical drugs or don't release results for fear of causing panic that may or may not be justified.  Risks are as of yet unknown for low levels of pharmaceutical drugs ingested over lengthy time periods or possibly even several decades.  Many prescribed drugs are intended for short time periods.  Some scientists believe they are harmless while others believe the possible risks justify further research.